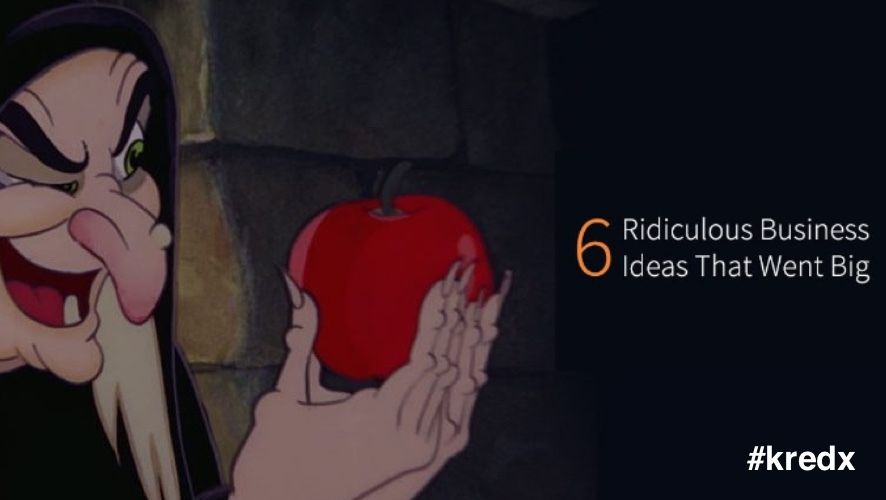 Ever had a “Eureka” moment when you’ve hit upon a million dollar idea? But then you shrug off the idea because it’s completely absurd. Well, have we got news for you! Often, it’s the most ridiculous of ideas that work and go on to make millions! Below is a list of our favorite ridiculous business ideas that made their owners millionaires.

Now here’s a toy that fascinated most of us as kids.What did it do? Nothing really, it ‘slinked’. Richard James, the inventor of the Slinky and a naval engineer, was inspired when he accidentally dropped a tension spring and watched it ‘slink’ away. James was so nervous to debut the toy in Philadelphia in 1945, that he asked his friend to stage the first slinky sale. And lo and behold! James sold 400 pieces priced at $1 in the first 90 minutes alone that it eventually went on to make a profit of $250 Million!

Another toy that made no sense but grew so popular that it was bigger than Hasbro and Mattel! It was just a tiny sack filled with beans made to resemble cute little animals with adorable names. The inventor of the Beanie Babies, H Ty Warner, despite initial discouragement that his toys looked like roadkill, went ahead with his dream and raked in $3-6 Billion in profits!

His strategy to increase the demand for this product is a lesson in itself! Warner did not believe in ads and neither did he sell his toys in big chain stores. By making the toy harder to get, he created more desire. He would also stop production of a particular kind of beanie baby when its initial stock was sold out, thereby making the few beanie babies in circulation a collectible!

It’s exactly what it sounds like – goggles for dogs. It’s even UV protected!  Who would’ve even thought that your dog needed goggles till Roni Di Lullo came up with this brilliant idea! Lullo, a software programmer at HP, went on to create a pet product empire with Doggles that in its first year itself made $100,000 in sales and in 2015 did sales of $3 Million!

This right here is a testament to ‘anything sells on the internet’. Eric Nakagawa and Kari Unebasami pioneered the concept of creating ridiculous captions for absurdly funny animal pictures.  Before they knew it, their website grew so popular that fans began submitting entries of their own to the tune of 8000 daily submissions. In 2007, they sold the website to Ben Huh who sensed an internet phenomenon in the making. He has since expanded the business with six sister sites, published a book that is on the New York Times Bestseller List and has made half a million from book sales alone.

Who doesn’t want a pet that’s so low maintenance that it just sits on your desk all day! Well, that’s exactly what Gary Dahl’s brainchild does. Introducing the Pet Rock, a pet that is completely hassle-free and easy to take care of. Priced at $3.95 per piece, Dahl makes a profit of $3 on every piece sold that amounted to a whopping $15 Million in six months of sales! The Pet Rock comes on a bed of hay in a cardboard pet carrier, complete with a pet training manual!

Those yellow smiley faces with the tagline, ‘Have a nice day’ are everywhere right? But do you know the story behind it? Harvey Ball, designed the smiley face for a PR company’s client but unfortunately did not patent it. Years later, two brothers, Bernard and Murray Spain, saw immense potential in Harvey Ball’s design and bought legal rights to the face and tagline, ‘Have a nice day’. They built an empire on these yellow faces till they sold it to Dollar Tree for $500 Million!

Like Steve Jobs once said, “People don’t know what they want till you show it to them.” So the next time you have a brilliant idea, don’t just sleep on it, act on it!

Next, read our blog on the 8 Negotiation Tips that can make every Business Meeting successful here.