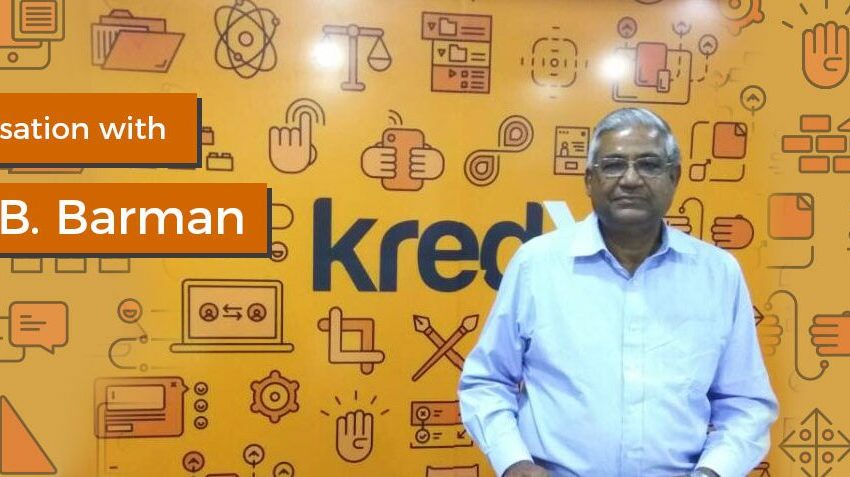 Interview: In Conversation With The Man Behind The Indian Digital Payment Revolution, Dr. R. B. Barman (Part I)

With India shifting towards a cashless economy, digital payments and online financing options are the need of the hour. The government has introduced several schemes and projects to further provide an impetus to the fast-growing digital payment sector of the country. To think that RTGS, NEFT, NECS, Mobile Payments, ATMs were introduced only in the 2000’s, India certainly has come a long way since then in mobile and digital payments! Recently, we had an opportunity to chat with the mastermind responsible for the introduction of these payment services in India, Dr. R. B. Barman, who is also an advisor to KredX.

Dr. Barman is the Chairman of the National Statistical Commission,  Advisor to the National Payments Corporation of India (NPCI) and has also served as the Executive Director of RBI, among the various other positions he has held during the span of his illustrious career.

KredX: What do you think is the future of digital payments in India?

Dr. Barman: If you are in a position to digitize, you encourage GDP growth by at least 1%.

Even a 1% GDP increase translates into a huge employment potential, improving the kind of the employment opportunities while also giving a push to the economic digitalization.

Through digitization you also plug leakages in the tax system such as people evading tax payment. You are thus in a position to get much better compliance to the extent that the government earns more returns and revenue, which can then be used for infrastructure development and further improving the growth potential of the economy.

KredX: What can SME’s do to keep up with the current trends?

The disadvantage is that certain types of products require the economy of scale. Certain products require the brand name or the credibility of a trusted company; both of which are roadblocks for small businesses. This is the issue that the Government is trying to help and support SME’s with as the country clearly needs more entrepreneurs and more industries to provide more employment opportunities. With all these things, there will be a lot of ancillarisation today because if you see, not even a car is not actually made by Maruthi. This is exactly where SME’s come and fit in because they bring their innovations and creativity to the table.

The strength of SME’s is that it is closely managed, and they focus on finding solutions in unique ways which lead to innovations.

Take the example of Italy. It is very famous for their SME’s because they create such high-quality products that are in demand everywhere! Our Indian SME’s too should continue to be innovative and focus on producing high-quality goods, and services which will help them grow by leaps and bounds.

KredX: How can SME’s make use of payment apps like BHIM & UPI for their growth?

Dr. Barman: In today’s world, if you have a credit card or debit card, most of the small merchants will not accept it because for them the 1% transaction cost is a big margin. Now, through BHIM (which is likely to be free and has a slew of benefits) we can reach out to these smaller guys.

Suppose, you get money in cash, there is an opportunity cost because cash handling has its own cost. But, if the money goes to the bank account where interest is given on a daily basis, the merchant earns some interest for the money that goes into his account. This is exactly what needs to be told and informed to the small merchants. This will be an innovative move but will only be successful when we explain the process to them and push them for digitization.

KredX: We heard that you are involved in the projects which are aimed at improving the lives of people in India. Can you tell us a little about that?

Dr. Barman: Human resource is very important for a country like India. And we cannot compare ourselves with any other countries as we have many countries within a country (multiple states) that have its own dynamics. What we need to figure out is how to make the best use of Human Resource.

In my view, each district is like a country in India and there are approximately about 660-670 such countries in India!

Our aim is to focus on each district and get an in depth analysis to know the potential of each district, what the people in those places are doing,  what they can do, how it can be improved and how our support system can help those districts. It is not only in terms of economics; it is in terms of overall development like education, health, agriculture, infrastructure and much more.  With the help of these projects we should be able to analyze these places and then find a way.

It isn’t practical to force a vast country like India to implement the decision taken by one person.

The needs of specific districts will vary from place to place. Hence, these projects are aimed to find out the solutions for each and every specific region which is otherwise being ignored.

Most of the policies in our country are not data driven; it is implemented because somebody thinks that it is correct.  The evaluation is being done at highly aggregated level, which doesn’t take so many parameters into consideration.

Historically and even today, India’s inequality is one of the highest in the world and the income distribution is asymmetric; it is highly scattered. But to the eyes of people who consider GDP alone, we are doing well. These are the issues we are trying to address through our projects and thereby, push for growth and development.

KredX: You are credited with bringing IMPS, RTGS and NEFT to the Indian banking system. How did you first come up with the idea to bring in something like this?

Dr. Barman: Our idea started with one question – Digitalization. It is very important as it takes us from one level to another level.  So we created the NCRI.

The idea came about when I was visiting Sweden. There is a banker’s association of sorts in Sweden which is a Not-For-Profit Organization. The bankers club had the concept of a unique banking system that inspired me.  We had a discussion about that once I was back in India and floated the idea about an organization for banking. Initially, we faced a lot of hurdles from trade unions, local bank unions etc. The Reserve Bank was the biggest clearing house in the country and with the thought of digitalization, they completely supported us. It took us some time to implement this but in 2007 the Payment and Settlement Systems Act was finally passed.  As a part of this Act, we also made the NPCI as a Not-For-Profit organization.  I retired in 2008, and now the team there is running it amazingly well. I have been a part of this team since  day-1 in the capacity of an Advisor.

This is Part I of a two-part series. Stay tuned for Part II!