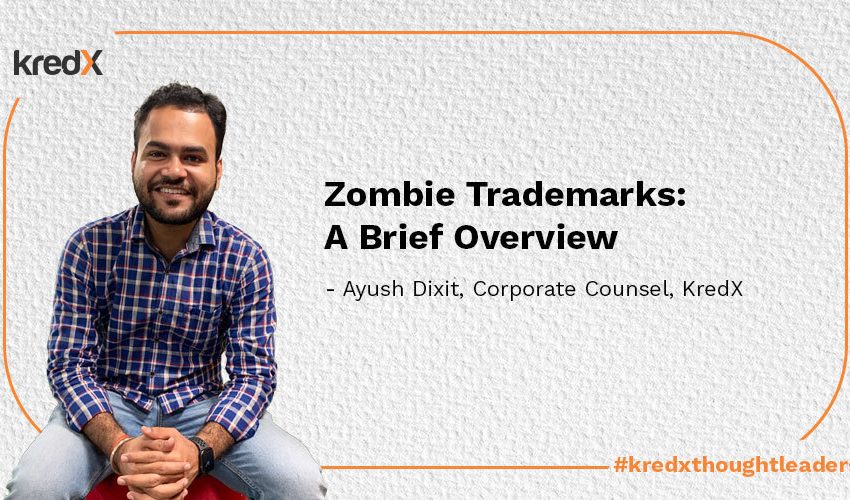 Zombie trademarks are quite popular in the United States; however, since India’s IP regime is still in its nascent stage, this concept has still not entered the Indian domain. Let’s find out more about zombie trademarks and their problems from Ayush Dixit, Corporate Counsel, KredX.

What is a Zombie Trademark?

A ‘Zombie Trademark’, as the name suggests, is one that has returned, though not miraculously, from the dead. A trademark that once enjoyed popularity but for various reasons attributable to the change in business, its owner had to discontinue its use, which led to its abandonment. Though it has vanished from the market, yet it finds a place in the minds of its users/consumers through a variety of products that exist in the market. It lives on in their memories as residual goodwill. Years later, sensing continuing value, an entrepreneur earmarks the trademark. He pretends to reintroduce it, say, on the original cookies and promotes the mark to an unsuspecting and delighted public, including the consumer. Synonymous terms used with zombie brands are also called ghost brands, orphan brands, dinosaur brands, antique brands, and graveyard brands.

On the pretext of such marks, the entrepreneur reintroduces them. However, the quality of goods sold under such trademarks go through changes, and hence the consumers are defrauded on a large scale. The consumers identify new goods as the ones, which were initially sold under the mark, now dead or have been abandoned. But what they get is something entirely different and mostly inferior in terms of quality.

Primarily, the problem involved with Zombie Trademarks is that once a trademark is abandoned by its owner, it becomes available to anyone on a first-come, first-served basis. In the case of Cumulus Media Inc. v. Clear Channel Communications Inc, it was held that: “A Defendant who successfully shows that a trademark Plaintiff has abandoned a mark is free to use the mark without liability to the Plaintiff.“

Further, in the case of California Cedar Prods. v. Pine Mountain Corp., it was held that:

“The first party to use an abandoned trademark in a commercially meaningful way after its abandonment is entitled to exclusive ownership and use of that trademark.”

So, the original owner, who had abandoned the trademark in the first place, cannot stop the new owner from using it. This, in turn, makes the general public think that the said trademark has been reintroduced in the market, which often leads to deception in their minds.

The biggest problem created by the Zombie Trademarks in the market is that they deceive the general public by making them believe that the products associated with such marks are the same as those initially introduced by the original owner. However, it can be avoided if a newcomer declares or issues a proper statement saying that the goods associated with the current mark are totally new and distinguished from the previous owner.

There is no specific remedy that can be used to tackle the evil created by zombie trademarks in the market. This is because of the fact that the original owner may be powerless, and the Federal Trade Commission may choose not to intervene. Hence there are no direct means of protecting consumers from a zombie attack. In an article titled “New strategies for owners of discontinued brands“,, the author suggests several steps that can be taken by the owners of discontinued brand marks to avoid the abandonment death knell.

Smucker Fruit Processing Case: A Chicago based company, River West Brands, filed an application for obtaining a trademark on the word “PURITAN”, which was already owned by another company called Smucker Fruit Processing Company. This trademark was sought to be obtained for cooking oil, and the existing trademark was also registered for a cooking oil too. However, on 01/06/2006, a petition was filed by River West Brands to cancel the Trademark of Smucker Fruit because it had discontinued the use of trademarks for a period of 3 years or above and had therefore abandoned it. However, Smucker filed a complaint in the United States District Court for the Northern District of Ohio against River West, wherein it denied the abandonment of the mark PURITAN and contended that though it did not use the mark in 2007, it did intend to re-launch the brand in connection with a new product formulation. Subsequently, in 2008 Smucker actually introduced a new oil using the mark PURITAN, and River Water withdrew its petition against Smucker Fruit, which otherwise would have resulted in another case of Zombie Trademark.

In most cases, the court(s), as well as the original owner of the mark, fail to take any actions since the mark in question was proved to be abandoned by Plaintiff. For ex-

The LA SALLE Case: In the case of General Motors Corp. v. Aristide & Co., wherein the Trademark LA SALLE was in dispute. General Motors claimed that it used the trademark for selling automobiles in the US from 1927 to 1940, and hence this mark gained popularity. On the other hand, Aristide contended that this mark had not been used by GM for the last 65 years and hence it must be considered abandoned. The Trademark Trial and Appeal Board (TTAB) ruled in favour of Aristide, stating that with 65 years of non-use, it can be reasonably concluded that the said mark stands abandoned. Hence, USPTO registered the LA SALLE mark to Aristide on 12/08/2008.

The above-cited case of LA SALLE is a fine example of zombie trademarks. In that case, the Board held that: “residual goodwill is not sufficient to avoid a finding of abandonment where the goodwill is generated through subsequent sales of a product by distributors or retailers.” However, the Board failed to appreciate the fact that this will lead to the rebirth of a dead trademark, which is capable of creating deception in the minds of the general public.

The instances of zombie trademarks are plenty in number; however, there is no remedy devised by the Courts or the Legislature to tackle the menace. The hands of the initial owners are tied, and the Federal Trade Commission cannot take any action once the said mark is declared as an abandoned trademark. In the Lahman Act of the US, a trademark is said to be abandoned if it is not used for three consecutive years and hence can be used as a tool by many who wish to exploit the fame and the existing publicity gained by the original owners.

As far as the position of zombie trademarks in India is concerned, there are no such cases or instances to date. However, with the advancement in the field of IP Laws in India, the possibility of zombie trademarks haunting the Indian market cannot be rejected outrightly. Hence the lawmakers of this country must prepare themselves for the fight against the walking dead anytime in the future.