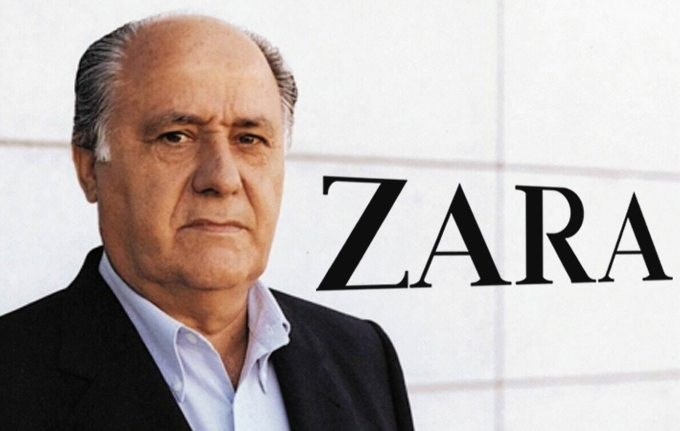 Zilch To Zara: The Story Of The Reclusive Genius Behind Zara

When the Forbes 2017 Billionaires List came out earlier this year, it was obvious who the richest man would be. Bill Gates and Warren Buffett are household names but one of the men contending them for the top spot on the global billionaires’ list might not have caught your attention. He is a self-made Spanish retail business tycoon, the richest man in Europe and the reclusive genius behind the fashion brand, Zara. We’re talking about Amancio Ortega.

Ortega is the founder and the former chairman of Inditex fashion group. He is the wealthiest retailer in the world and currently the fourth richest man globally who had also briefly surpassed Bill Gates as the richest man in the world! Ortega is said to be a workaholic and it is said that he did not take a holiday for 25 years. He was no rich kid and he made it to the top from a not so pleasant past.

Ortega was born in the year 1936 to a poor family that couldn’t even afford even the basic necessities. His father was a railway worker and his mother was a housewife. His mother used to plead for credit at the nearby stores without Ortega’s knowledge. One day when he went grocery shopping with his mother, he found out that his mother was pleading for credits at the store when the store owner denied giving her any more credits.

Trying to overcome this displeasing and insufficient situation in life, he decided he was never going to let his family suffer in poverty anymore. At the age of 14, he had to quit school as they moved to A Coruña due to his father’s job. Shortly after shifting to A Coruña, he got a job as a shop hand for a local shirt maker called Gala where he learned to make clothes by hand. As a working teenager, he did not take his work for granted; instead, he focused and understood that the best way to make money is by giving the customer what he wants. At 16, he had already started to analyze the customer’s needs and meet their ultimate demand.

In the early 1950s, he shifted to Galicia and set up his own sewing cooperative with single women who had sewing proficiency to sew products like babywear, lingerie and nightwear. He was reported to be a great boss and was very kind to his employees. He provided his employees good working conditions which were very uncommon during those days.

In 1972, with the help of his family members, Ortega founded his first company called Confecciones Goa that sold bathrobes. In 1975, he opened his first Zara store with his late wife Rosalia Mera in A Coruña, Spain. While running his first Zara outlet, he realized that customers wanted affordable clothing of what they saw on the ramp. From that day, he just dedicated to keeping his customers satisfied. Zara comes up with a new collection every two weeks keeping its customers super satisfied. Today, Zara has over 2000 stores in 93 different countries and 50% of its products are still manufactured in Spain. Zara is the Inditex Group and it includes the brands Massimo Dutti, Zara Home, Stradivarius, Bershka, etc. and has more than 6000 stores around the world with over 92,000 employees.

Although the second richest man in the world, Ortega keeps it very low profile and is known for his preference for a simple lifestyle. He actively takes part in the production and design process of the company. He eats lunch with his employees and is very friendly with them. He made his public appearance in 2000 to his company’s initial public offering on the stock market. This made headlines in the Spanish Press but he gave interviews to only three journalists. His private life has led to the publication of books such as Amancio Ortega: de cero a Zara (From Zero to Zara).

In 2011, Ortega announced his imminent retirement from Inditex, the parent company of Zara. The vice-president and the CEO of the Inditex have been asked to take over his place and dominate the textile empire. Though he has retired, he hasn’t stopped working. He still goes to the headquarters every single day and takes part in meetings and contributes whenever he has an idea. Ortega is a very kind man and is known for his simplicity. In 2012, Ortega donated about 20 million euros to Caritas Internationalis which is a Roman Catholic relief organization.

Ortega proved that you don’t always have to do what everyone is doing. When he heard people say, he would die of success, he said

“Die of success? Give me a break! We have only started!”

Ortega did things his own way rather than following the footsteps of already flourished fashion industry leaders of Paris, Milan or New York. His story is a great example of success achieved through following and trusting your intuition.