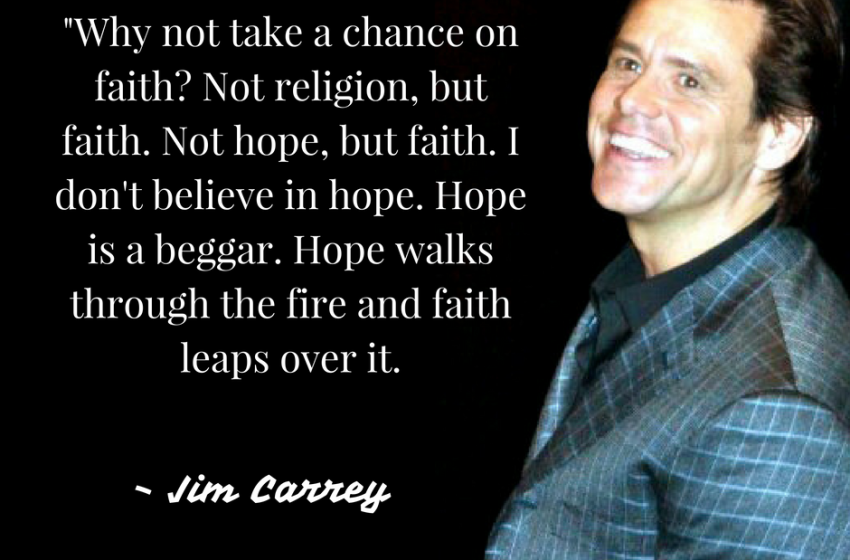 Why not take a chance on faith?

Life, as we know, is a roller coaster ride. You have your up’s and are in constant fear of your down’s and while you are at it you Learn, maybe a great deal or not thing at all. Today Kredx brings you the Inspiring story of the famous ‘Jim Carrey’.

Jim Carrey was born in Ontario and has three older siblings.  In order to succeed in school, he had to work around ‘dyslexia’ a learning disability. Money was a big issue, the family had to live in a Van for a while and he had to work an eight hour night shift to add to the family income while also attending school during the day.

Jim had a rough start in life though. In his early years at school, he describes himself as quiet and having no friends. Yet, he discovered that he could make friends by making people laugh. That was his turning point. But the results weren’t all positive. One teacher wrote on his report card: “Jim finishes his work first and then disrupts the class.” But he was so convinced with his craft that he thought beyond just entertaining his friends, he wrote a letter to Carol Burnett of the Carol Burnett Show pointing out that he was already a master of impressions and should be considered for a role on the show.

He quit school at the age of 16 to focus on comedy full time. Jim says that he’s always believed in magic. When he wasn’t doing anything in Hollywood, he would drive up and sit in his car on Mulholland Drive, look out at the city, stretch out his arms, and say, “Everyone wants to work with me. I’m a really good actor. I have all kinds of great movie offers.”

When the going got tough and he was in his struggling phase Jim practiced to Visualize his success, One of these nights he wrote himself a check for $10,000,000 for “Acting Services Rendered,” which he dated for Thanksgiving 1995 and carried it in his wallet from that day forth.

The rest as they say is history. His determination to not give up when there was no hope is admirable.  His optimism, tenacity & incredible belief in himself are great learning lessons for everyone.

“Why not take a chance on faith? Not religion, but faith. Not hope, but faith. I don’t believe in hope. Hope is a beggar. Hope walks through the fire and faith leaps over it.- Jim Carrey