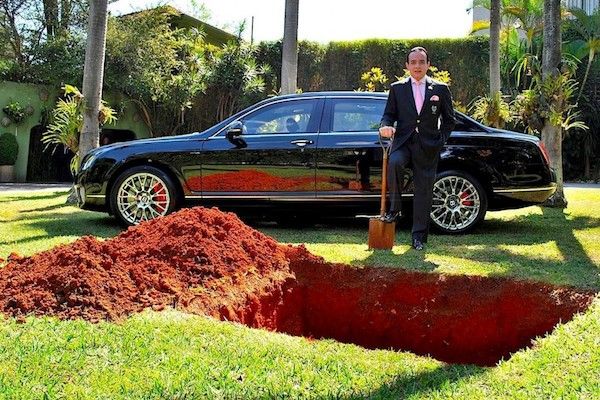 The story about a wealthy businessman in Brazil who wanted to bury his beloved Bentley became an internet sensation in 2013. But the real reason he pulled such an absurd stunt left many speechless. Here’s the story of Thane Chiquinho Scarpa and the beautiful reason behind the ‘funeral’ of his car.

Thane Chiquinho Scarpa, one of the wealthiest man in Brazil grabbed media attention across the globe when he announced that he was going to bury his $450,000 Bentley Flying Spur in his home garden. Why? Because he wanted to be comfortable in the afterlife like the pharaohs of Egypt. Scarpa took to social media to announce his plans and faced severe backlash from the internet community. People wondered why he wouldn’t just instead donate the car to a charity, if Scarpa was mentally unsound or if he was burying the car just to avoid paying taxes. But nothing deterred Scarpa. He continued to post photos and updates of his burial plans for a week gaining attention over the span of time. He even invited several media outlets to witness the burial. Finally, the day of the “funeral” arrived and right before he lowered his beloved Bentley into its freshly dug grave, he stopped the burial and went on to reveal the real reason behind such a stunt:

“People have condemned me for trying to bury a million dollar Bentley. The fact is, most people bury something a lot more valuable than my car. People bury hearts, livers, lungs, eyes, and kidneys. This is absurd. There are so many people out there waiting for a transplant and you will bury healthy organs that can save so many lives. This is the biggest waste in the world. My Bentley is worthless in comparison to life giving organs. There is no wealth more valuable than an organ, because there is nothing more valuable than life.

The businessman thus delivered a powerful message in the most innovative way imaginable. If this does not urge you to be an organ donor, nothing else will. Let this Monday be the day you pledge the gift of life.