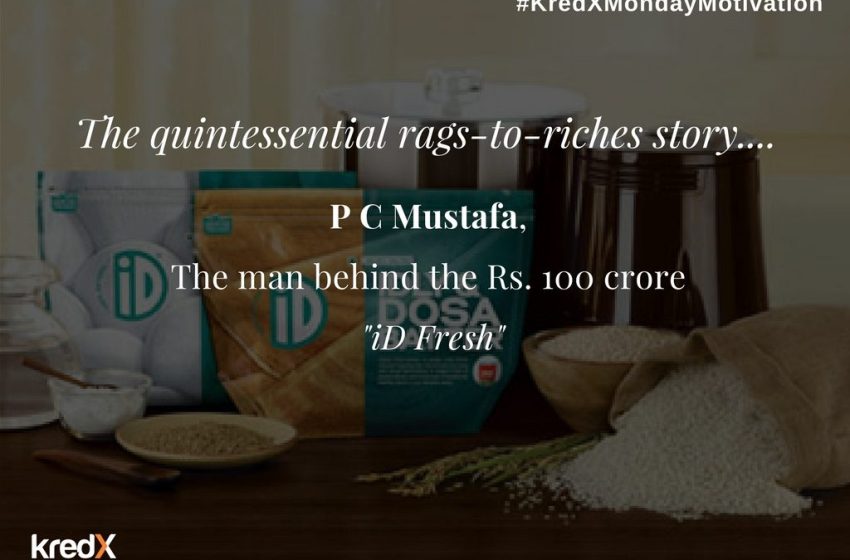 Rags To Riches: The Story Of PC Mustafa

Not everyone is born with a silver spoon in one’s mouth. Not everyone has an easy start in life. Yet there are some who shatter the conventional divides and emerge successful. Nobody epitomizes the quintessential rags-to-riches story better than PC Mustafa, the man behind the Rs. 100 crore idli and dosa batter brand, iD Fresh. A brand that has gone on to become a staple in every kitchen across India and the Middle-East.

Hailing from a nondescript little village in Wayanad, Kerala, Mustafa was born to Ahmed, a coolie, and Fathima, a housewife who had never stepped inside a school. Mustafa was no stranger to hardships. The stark lack of resources and opportunities resulted in Mustafa failing 6th grade and almost dropping out of school. This turned out to be just the wake-up-call he needed. Backed by a teacher who believed in him, Mustafa convinced his father to give school one more try. He had always had an affinity towards Mathematics and soon began doing extremely well at school. He went on to study engineering at NIT, Calicut and bagged a job at Motorola in Bangalore. While on an assignment in Ireland, Mustafa realized how much he missed his country and yearned to return to India. However, financial constraints forced him to take up another well-paying job in Dubai and much to the shock of his friends and family, Mustafa decided to call it quits after a seven-year-long stint. He had always wanted to start something of his own. The entrepreneurship bug had bitten Mustafa and it was evident that there was no turning back.

In 2005, Mustafa and his cousins, Shamsudeen, Nazer, Jaffer, Noushad and Mustafa, marked the beginning of their batter business with an initial investment of ₹25000. They began their operations in a tiny kitchen, grinding and sealing 10 packets of idli and dosa batter a day in a 550-square-feet space. They gave out samples of their batter to regular Kirana customers to test the waters and were surprised to see how quickly they flew off the shelves. Encouraged by their success, they decided to scale up their operations. Mustafa who was then pursuing a management degree at IIM, Bangalore, finished his studies and joined his cousins full-time as the CEO of iD Fresh Food in 2007. The rest, as they say, is history.

Mustafa and his brothers have come a long way from operating out of a tiny 550 sq. ft. kitchen to setting up a new 75,000 sq. ft. manufacturing plant in Hoskote. Mustafa’s story certainly serves as an inspiration to all those who hesitate to act on their dreams.