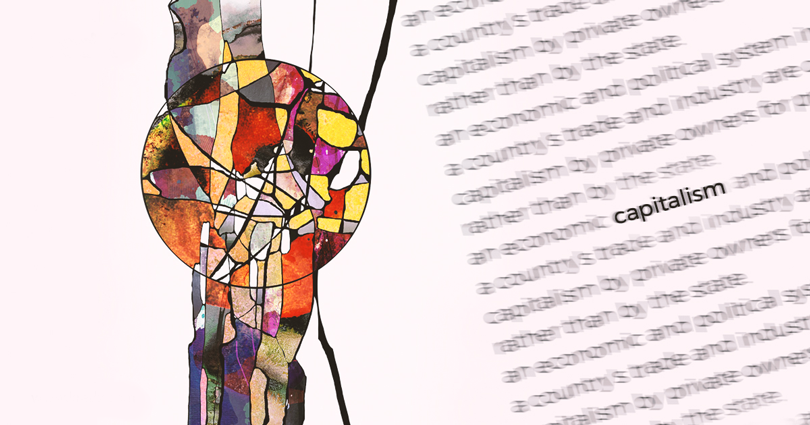 Art is one of the most popular forms of social expression used to convey or describe anything under the sun; be it humanity, emotions, money, capitalism and so on. Capitalism being the driving force of today’s cultural awakening, here’s a look at what contemporary artists think of Capitalism.

The true essence of any social system can be measured through the works of the artists who are cultivated by the morals and cultural norms of that society. While Honore de Balzac gave pessimistic interpretations of the working class conditions of 18th century France with hard boiled realism as his narrative vehicle, Hieronymus Bosch made spellbinding paintings about the nature of reality and the afterlife in conformity with predominant religious views of the 14th century. There is a reason artists are considered to be the true representatives of authentic social thought.

50,000 years of behavioral modernity has spawned diverse philosophies, opinions, cultural beliefs and differing existential schools of thought that have all but helped populate a very rich artistic ecosystem. And in this day and age, the relevance of the modern artist comes attached to the rooted economic practice of capitalism. As an ideology, capitalism has managed to infiltrate the power centers of the modern world and emerge as dominant system to live by for most of the urban public of today. Here are 3 contemporary artists and a note on their works concerning capitalism:

There is diabolical wit to Packard Jennings and his work. A consummate anti capitalist as well as an accomplished cultural jammer(someone who uses guerilla tactics to disrupt mainstream cultural values in favour of anti consumerist messages), Mr. Packard’s distaste for the established order has favoured the world with interesting forms of art. His website Destructables.org is a do it yourself guide to the politically assertive who wants to express themselves in the public spaces in ways that are not pleasant for governing power structures. Innovative dissent is the theme for Mr. Jennings when it comes to artforms. This is emphatically true for his most famous work “Business Reply” which is an instructional pamphlet that imagines a corporate office indulging in mayhem and eventually turning their surroundings into an urban utopia. However, the most subversive form of art from Mr Jennings involves his Jennings Centennial Society line. The idea was to shop drop (the opposite of shoplifting) a Mussolini action figure inside a popular supermarket. When someone actually attempts to buy it, the social message becomes that global consumerism can package and sell anything, even fascism.

SUPERFLEX are a collective of Danish artists. Their art is well known for its subversive nature that challenges the established power frameworks and mainstream philosophies that dictate the current world order. Founded by Jakob Fenger, Bjørnstjerne Christiansen and Rasmus Nielsen in 1993, the group has created a very distinct voice for themselves that asks questions of what the contemporary role of an artist actually is. The questions, it has to be noted has landed these artists in trouble multiple times with the law. In 2008 as part of a film project, SUPERFLEX flooded an exact replica of a McDonald’s joint. Half eaten boxes of fries, cans of soda, the furniture and even Ronald McDonald collectively going underwater. It was a lesson in corporate helplessness to constructively engage with the problem of climate change. But the lawsuits that came after did not care about the message or the art itself. Another important work by the group is called Power Toilets. SUPERFLEX made copies of the architectural plans of the toilets used in the U.N. Security Council Building and erected replicas of them on a beach in Netherlands. In a similar fashion the floor plan for the toilets in J.P. Morgan Chase was fashionably erected on a working class diner in New York. Ultimately, the endeavour planned to gauge the distance between the common man and the elites of the world functioning separately from each other. The distance it seemed, at a biological level was rather miniscule.

Banksy’s ideas of cultural subversion can scald the uninitiated. This man whose identity to this day remains a secret, started working out of U.K. in the 1980s. No contemporary artist has glorified street art and the public perception of it, the way Banksy has. From, stenciling paintings that depict anti war sentiments on Israel’s West Bank Wall to organizing an art exhibition that had 164 live rats scuttling around his patrons, Banksy’s art has a very clear cut sense of deconstructive purpose. Think about his work that repurposed Monet’s “Water Lilies” to include trash bags and discarded shopping carts among the lilies. Imagine the stencil sketch that depicted Steve Jobs found holding a garbage bag and an original apple computer in the refugee camp in Calais, France. Banksy is a guerilla artist who had always strived to question established formats of cultural and regulatory assortments. Take for instance his exhibition in 2006 which had a live elephant painted with pink wallpaper pattern to blend in with the background. The flyers given out during the exhibition read, “There’s an elephant in the room…20 billion people live below the poverty line”. Banksy represents one of the most culturally exalted figures of contemporary art whose crudity is rather brilliantly balanced with an immaculate sense of cleverness.

Modern social structure has its takers as well opponents. Contemporary art, however, is more in sync with the voices of dissent. Artists lend their voices to the oppressed and the neglected whose coffers capitalism essentially fails to acknowledge. Subversive art forms are a spectacular way to bring these thoughts into the mainstream. The need to talk about things we willfully fail to see is now, more than tomorrow.