COVID-19 Crisis – An In-Depth Insight Into The U.S., China Markets & Its Ripple Effect

The impact and economic consequences of the coronavirus outbreak remain uncertain. The pandemic which broke out in the Wuhan province of China is currently dominating the world, affecting the entire economic spectrum. With a worldwide quarantine and output halt, it is easy to assume that the world is amidst a perfect storm situation.

As a result of the acute reduction in the macroeconomic outlook, research firm S&P has significantly lowered its GDP forecasts for the year. It now predicts a global contraction of 2.4% before a rebound to growth of 5.9% next year. 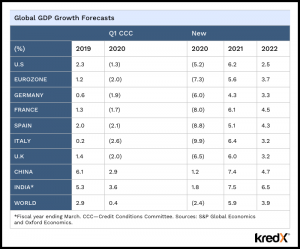 Keeping in line with this, here’s a detailed report on the pandemic’s impacts on world superpowers China and the U.S., its economic implications, and consequent impact.

The resurgence from the pandemic has already set off in a few parts of Asia-Pacific, with China leading the list. However, considering the current geopolitical circumstances, progress is likely to be slow with occasional setbacks. With the health crisis potentially under control with tight quarantine measures, the country has been able to outdo the first-wave of the pandemic and is restarting its economy gradually.

The draconian quarantining of the epicentre and countrywide steps to curb the spread of the virus have been expensive. As compared to last year, China’s exports fell by 17.2 % during the January-February period compared due to the pandemic outbreak, whereas imports dropped by 4%. The contagion further impacted the Q1 performance of 299 large manufacturers, with more than 80% reporting an increase in operational cost, as per the China Enterprise Confederation (CEC) released data.

A drastic drop in consumption in China, a sluggish restoration of the full functioning economy, and the average return of migrant workers to manufacturing centres indicate that the global manufacturing hub is yet to be fully functional to be running on full throttle.

Industrial sector operating capacity is around 90% of normal levels as workers steadily return from their home provinces. The service sector is opening at a slower pace, hampered by social distancing rules that look set to remain at least for now. Policy stimulus has been building and should provide a tailwind for ongoing recovery through the second half.

Elsewhere, no economy has been spared the high expense of at least one month of rigorous social distancing, which means extensive hits to growth and development of the nation. 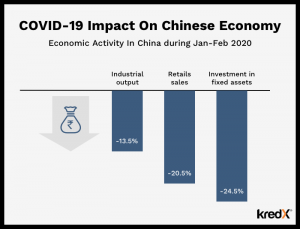 The U.S. economy is crumbling amidst the coronavirus, with the market recording the sharpest decline in economic activity since World War II. With a countrywide quarantine and an impending recession, the economic implication of the nation seems to be beyond perceivable.

Apart from the demand shock, several developments are also dampening the growth of the nation – including the fall of oil-price tied to global supply chain disruptions.

Research firm S&P forecasts that the impact of the pandemic outbreak on the nation’s GDP will be far more severe than it once assumed. The study further revealed a decline in real annualised GDP of 7.6% in the first 3-months of the year and 35% (annualised) in the second quarter, translating to a decrease of 11.7% peak to trough.

Although the country may see signs of recovery during the 2nd half of 2020, it won’t be enough to recover the overall economic brunt brought by the pandemic. With businesses shut down, the unemployment rate is expected to peak at 19% in the month of May. As per McKinsey & Company, the U.S. economy could take until 2023 to recover from the pandemic’s impact. 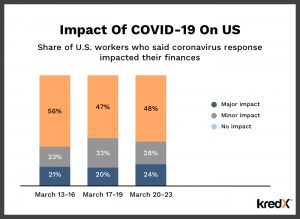 Supply, in essence, is what we collectively produce, but the pandemic outbreak ushered in a sudden halt of the labour supply, putting the entire economy at halt. “When you face a supply shock, policies like those used during the Great Recession work, but only in containing the secondary shock to people’s confidence, the demand shock. It’s important to respond on the fiscal and monetary fronts. What’s really key is that we don’t add additional shocks on top of the initial crisis that is having such a severe effect on our ability to work and produce,” said Filippo Taddei, Associate Professor of international economics at Johns Hopkins. The path to recovery starts when the pandemic reaches a controllable level. The potential economic growth, to which it must return will totally depend on how rapidly the supply side picks up functioning, thus kickstarting the economy.